The Palouse to Cascades State Park Trail is a 289 mile long rail-trail that extends from Cedar Falls near North Bend to the Idaho border. It is being developed on the former railroad right-of-way of the Chicago Milwaukee St. Paul and Pacific Railroad which operated on it between 1909 and 1980 when the company went into bankruptcy. The State of Washington purchased most of the ROW and over times sections have been transferred to State Parks.

Beginning at Cedar Falls the PTCT climbs gently up to the Snoqualmie Tunnel, at 3.2 miles the longest rail-trail tunnel in the United States. Hyak is the most popular location to access the trail in summer and winter, but the tunnel is closed November 1st to May 1st due to the potential for ice to fall from the tunnel ceiling. Going east from Hyak you will pas along Lake Keechelus and to Lake Easton. The PTCT parallels I-90 to South Cle Elum where there is a restored railroad museum and interpretative displays. East of South Cle Elum it passed through the upper Yakima Canyon following close to the river.

From here, the trail comes out at Thorp and then heads east through the farmlands around Ellensburg and Kittitas. Just east of Kittitas you pass over I-90 on the Renslow Trestle. From here to the Columbia River the trail is downhill through the Yakima Training Center which is open to the public. You can now cross the Columbia River on the 3,036 foot long Beverly Bridge with spectacular views. Heading east there is an active railroad until Warden. The trail surface east from Warden is rougher than the west side and wide tires/boots are advised. You will pass through Lind and then the small community of Ralston. There is now a bypass of a missing trestle over Cow Creek through an adjacent ranchers operations. Please stay on the trail route through their property. Additional communities going east are Ewan, Pine City and Malden but there are no public services at these places. Rosalia is the first location with food. The final town is Tekoa near the Idaho border. You can continue east via back roads to connect with the Trail of the Coeur d’Alenes in Plummer. 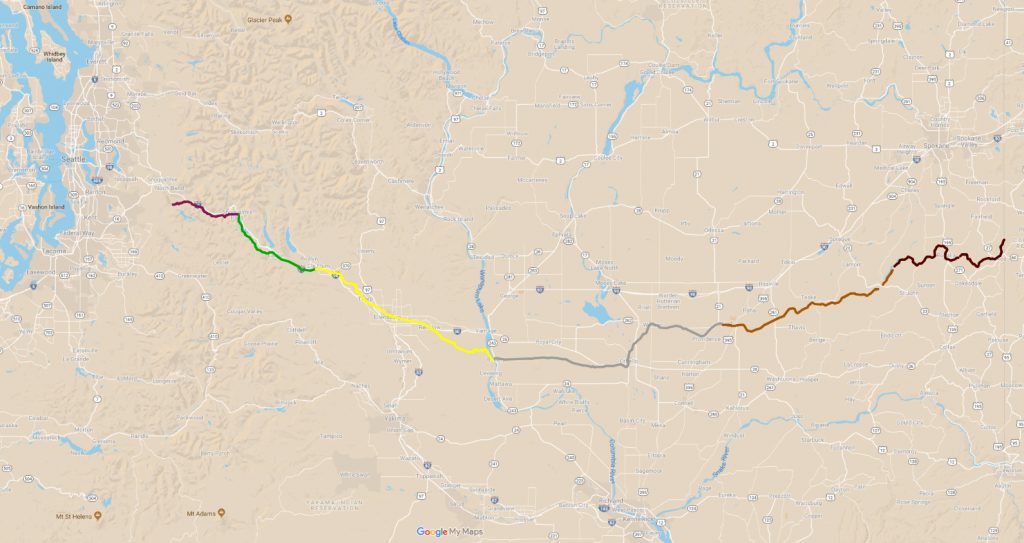